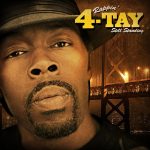 Rappin' 4-Tay made his debut on Too Short's 1988 album, Life Is...Too Short, and the Fillmore, San Francisco rapper would never look back. After a short prison stint, 4-Tay started off his solo career with Rappin' 4-Tay Is Back in 1991. Three years later, the follow-up album Don't Fight the Feelin came, which included the hits "Playaz Club" (which hit #36 on the Billboard … END_OF_DOCUMENT_TOKEN_TO_BE_REPLACED