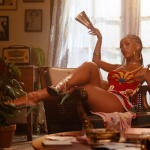 Doja Cat drops the visual for her melodic single “Vegas” from the ELVIS Original Motion Picture Soundtrack via House of Iona/RCA Records. Directed by child. (Koffee, Roddy Rich, Big Sean), the video features Shonka Dukureh, who plays Big Mama Thornton in the film and will be on the upcoming soundtrack as well. The soundtrack is set to be released on the same date as Baz … END_OF_DOCUMENT_TOKEN_TO_BE_REPLACED