The World's Most Dangerous DJ 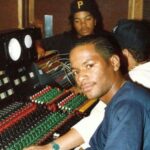 DJ Speed, the legendary N.W.A DJ for Eazy-E, The D.O.C., and J.J. Fad, rocked crowds for the Ruthless Records acts and became known as "The Worlds Most Dangerous DJ". Born in Compton, California seven houses down from Dr. Dre, two blocks down from Eazy-E and three blocks down from MC Ren, the Super Dope Speed, as he was once called, traveled the world with the N.W.A and The … END_OF_DOCUMENT_TOKEN_TO_BE_REPLACED