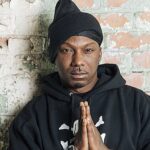 Yesterday, Ras Kass took to Instagram to announce the HRSMN group album, The Last Ride, which reunites him with Kurupt, Killah Priest, and Canibus. The supergroup formed in the early 2000's and delivered The Horsemen Project in 2003. The new album is set to arrive on June 18th. Although little is known about the upcoming project, it's suffice to say that we can expect … END_OF_DOCUMENT_TOKEN_TO_BE_REPLACED