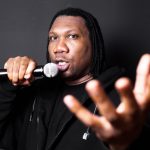 Last month, KRS-One released the Sun One-produced "Knock Em Out" song, and now the blastmater just dropped his newest single, "The Beginning" via R.A.M.P Entertainment. The new track is also produced by Sun One as well. KRS-One was the leader of Boogie Down Productions, one of the most influential hardcore hip-hop outfits of the '80s. At the height of his career KRS-One was … END_OF_DOCUMENT_TOKEN_TO_BE_REPLACED