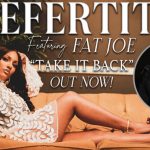 R&B singer Nefertitti Avani dropped her new Tim Kelley-produced single “Take It Back” featuring Fat Joe. Nefertitti is currently working on her debut album, which also has MC Lyte assisting on the project as well. In addition to her upcoming album, Nefertitti is also set to feature on the upcoming Snoop Dogg album Algorithm, which is releasing next week (November … END_OF_DOCUMENT_TOKEN_TO_BE_REPLACED