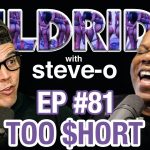 Too Short, bay area legend, music icon, and one-fourth of the west coast supergroup Mount Westmore was recently a featured guest on the Wild Ride! With Steve-O podcast show. During the conversation between Steve-O, the star from MTV's Jackass series, and Shortdog, the two talked about things like Too Short getting his start selling mixtapes to drug dealers, touring with N.W.A, … END_OF_DOCUMENT_TOKEN_TO_BE_REPLACED 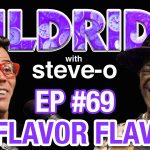 Iconic Public Enemy hypeman Flavor Flav was a recent guest on Steve-O‘s Wild Ride Podcast, and the two sat down to discuss a myriad of topics including Flav being 12 years sober, recording with super-producer Dr. Dre for what Flavor Flav says is a forthcoming album from the good Doctor, being the most sampled voice in music history, gangsta rap vs. conscious rap where he gives … END_OF_DOCUMENT_TOKEN_TO_BE_REPLACED 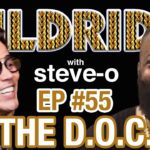 Iconic Dallas, Texas MC/Songwriter The D.O.C. was the most recent guest on Steve-O's Wild Ride Podcast, and the two sat down to discuss a myriad of topics including D.O.C.'s involvement in forming one of the most legendary record labels in history in Death Row Records, introducing Suge Knight to Dr. Dre, moving to Atlanta and working with MC Breed, Snoop Dogg leaving Death Row … END_OF_DOCUMENT_TOKEN_TO_BE_REPLACED