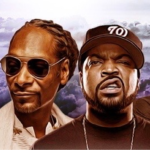 Here’s the first released song from Too Short, Ice Cube, E-40, and Snoop Dogg —- collectively known as Mt. Westmore. Produced by Battlecat, the group’s debut song is called “Step Child”, and it is featured on the soundtrack to the American Skin film. https://youtu.be/ye1XR_Cyrt0 Check out the American Skin soundtrack below: … END_OF_DOCUMENT_TOKEN_TO_BE_REPLACED