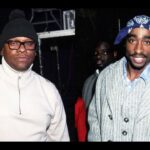 Scarface and 2Pac, two of the most prolific and vivid songwriters in hip-hop history, collaborated to create a deeply introspective masterpiece.  As the lead single from Scarface's fourth studio album The Untouchable, produced by Mike Dean, Tone Capone, and Scarface -featuring Johnny P on the hook - the song was released shortly after the death of 2pac, peaking at number … END_OF_DOCUMENT_TOKEN_TO_BE_REPLACED