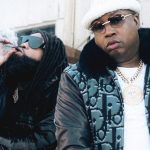 E-40 just dropped his new Heavy On The Grind Entertainment/Virgin Music single “It’s Hard Not To", featuring Sada Baby and produced by Deca, from his forthcoming album, Rule of Thumb. Rule of Thumb will be the first album that E-40 has released since he dropped the Too Short collaboration project Terms and Conditions project in December 2020, which preceded the two west … END_OF_DOCUMENT_TOKEN_TO_BE_REPLACED