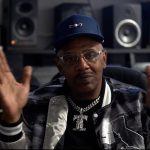 Long Beach, California emcee RBX recently announced an upcoming documentary entitled Surviving Tha Row: Past, Present, Future - The X Files, which will also be accompanied by a soundtrack, and followed up with a new album. “The Narrator” RBX, who has one of the most distinct voices in hip-hop, first appeared on the 1992 Dr. Dre solo debut album The Chronic on Death Row … END_OF_DOCUMENT_TOKEN_TO_BE_REPLACED