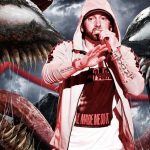 Yesterday (September 28), after much speculation about Eminem being featured on the upcoming Venom: Let There Be Carnage soundtrack, especially having done basically the theme song for Venom, Eminem confirmed that he, Polo G, Mozzy, and frequent collaborator Skylar Grey would be teaming up for cut on Venom: Let There Be Carnage. As the sequel to the Tom Hardy-starring movie … END_OF_DOCUMENT_TOKEN_TO_BE_REPLACED