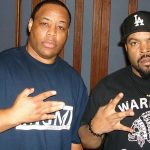 West coast icon Ice Cube dropped “Pocket Full of Evil”, a song presumably off his as-of-yet untitled upcoming album. The E-A-Ski-produced banger appears to be a joint release via Death Row Records & Lench Mob Records, but no official word has been given about the song and its release. Cube has recently released a couple of lyric videos for the songs "Stand Tall" and … END_OF_DOCUMENT_TOKEN_TO_BE_REPLACED