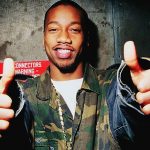 Planet Asia, who continues to be a permanent fixture in hip-hop and has dropped veritable smorgasbord of dope material over the years, took to social media on yesterday (October 3) to announce he's dropping a new project this month entitled Rule of Thirds. The upcoming album will also be produced by Evidence of Dilated Peoples , who handled production duties for Planet Asia … END_OF_DOCUMENT_TOKEN_TO_BE_REPLACED