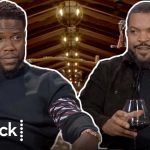 Ice Cube was the featured guest on episode 10 of Kevin Hart’s new Peacock talk show Hart to Heart. During the conversation between the two entertainers, Cube spoke on getting into movies with Boyz N The Hood and working with late director John Singleton as his solo music career is beginning to take off “[I’m] at the height of my solo career,” the former member of N.W.A. … END_OF_DOCUMENT_TOKEN_TO_BE_REPLACED