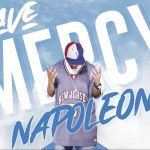 Klock Work Entertainment, the label founded by the late Johnny J, recently released the Have Mercy (Part 1) album from Napoleon of 2Pac’s infamous Outlawz group. Before his untimely passing, Johnny J signed Napoleon to his label in 2002 and intended to put out Have Mercy as a double-disc release by 2005. Klock Work Entertainment had executive produced a video from that … END_OF_DOCUMENT_TOKEN_TO_BE_REPLACED