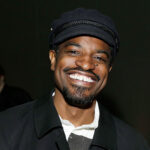 Rapper/singer/songwriter/actor/record producer Andre 3000, one half of the iconic Southern hip-hop duo known as Outkast with Big Boi, shot to stardom during the mid 90’s when the group released their debut classic album Southernplayalisticadillacmuzik in 1994 on LaFace records. Since then, Outkast released 5 more albums: ATLiens, Aquemini, Stankonia, Speakerboxxx/The Love … END_OF_DOCUMENT_TOKEN_TO_BE_REPLACED