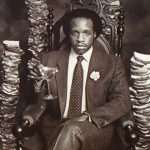 Walter “Junie” Morrison, who played keyboards in Parliament-Funkadelic and the Ohio Players, died on Saturday. “It is with great sadness that the Ohio Players have lost on this earth another one of the original members of the band Walter ‘Junie’ Morrison,” the group’s James “Diamond” Williams wrote on Facebook. “When I got in the band in 1972 he was my roommate … END_OF_DOCUMENT_TOKEN_TO_BE_REPLACED