No One Can Do It Better 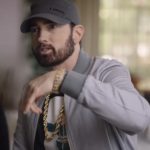 The D.O.C. is premiering his documentary The DOC at the Tribeca Film Festival this Friday, June 10, in New York from director David Caplan. Today, Eminem, who is one of several people featured in the documentary, took to social media to share a preview snippet of his appearance. In the clip, Em recites lines from the song “Mind Blowin’”, with D.O.C. in the background … END_OF_DOCUMENT_TOKEN_TO_BE_REPLACED