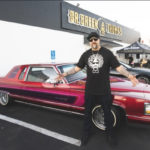 B-Real, aka Dr. Greenthumb and one of the lead rappers of multi-platinum Cypress Hill fame, will drop a double A-Side release on 4/20 via eOne. The tracks "Mother Mary" ft. DJ Paul and "Triple OG" ft. Freeway were both produced by GRAMMY-winning producer Scott Storch and will be featured on B-Real's forthcoming solo album, due out this summer.  More details to be announced … END_OF_DOCUMENT_TOKEN_TO_BE_REPLACED