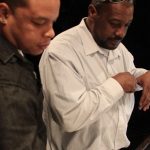 California producer Laylaw was one of the architects of the G-Funk sound. His work with Dr. Dre has appeared on releases for Ruthless Records, Death Row Records, and Aftermath Entertainment. Laylaw also served as advisor to Eazy-E during his days with groundbreaking gangsta- rap group N.W.A. The producer also created music with the late 2Pac, their association starting with the … END_OF_DOCUMENT_TOKEN_TO_BE_REPLACED