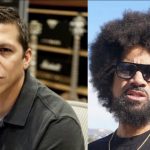 Producers Dem Jointz and Mike Elizondo, Jr. are no strangers to success or getting the Grammy Award nods for their multi-platinum work. Both producers have stellar production discographies, and both are intricately linked to Dr. Dre and his Aftermath Entertainment family tree. Dem Jointz is a 2x-Grammy Award winner, who has produced tracks for artists including Chris … END_OF_DOCUMENT_TOKEN_TO_BE_REPLACED