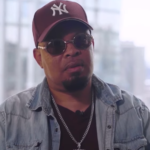 Former Death Row Records producer Curtis “Kurt Kobane” Couthon is featured on the latest Art of Dialogue show and discussed the final hours of 2Pac's life, detailing the day he, 'Pac, the Outlawz and other Death Row affiliates drove to Las Vegas, Nevada. Among the topics discussed in the interview, Kobane speaks on the encounter 2Pac had with the Long Beach Poly varsity … END_OF_DOCUMENT_TOKEN_TO_BE_REPLACED