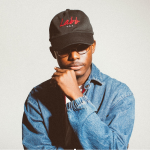 Today October 22), Brooklyn hip-hop artist HDBeenDope and multi-platinum producer, Earl On The Beat announced the release of their forthcoming joint project Side A: The Preface, which includes collaborations with Roc Nation artist Maeta and Landstrip Chip.   In support of the release, HD also dropped a brand-new music video for “Hold It Down" featuring Landstrip Chip. … END_OF_DOCUMENT_TOKEN_TO_BE_REPLACED