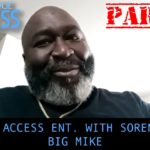 During part 4 of the interview between Big Mike of the Geto Boys and Soren Baker of Unique Access Entertainment​, the Houston, TX emcee discusses how he thinks Rap-A-Lot Records sabotaged his Hard To Hit LP. The former Geto Boys member also tells Soren Baker​ about how Dr. Dre wanted some "Straight Gangstai-sm" for the producer's 1992 solo The Chronic. Watch the video … END_OF_DOCUMENT_TOKEN_TO_BE_REPLACED