Hand On The Pump 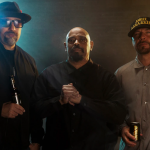 Cypress Hill revisits the classic "Hand On The Pump" song from their 2x platinum debut album Cypress Hill, which was released in 1991. The new remix is done by the incomparable DJ Muggs, who produced the self-titled debut album for the group in 1991 using jazz, R&B, psychedelic rock, and metal samples as the soundscape for B-Real and Sen Dog's lyrics. DJ Muggs continues … END_OF_DOCUMENT_TOKEN_TO_BE_REPLACED