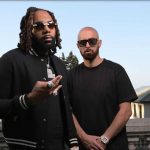 Yesterday (November 9), multi-platinum Atlanta-based artist and entrepreneur, Money Man, received his entire 7-figure advance in Bitcoin via Cash App from Empire’s Founder & CEO Ghazi. Built from the ground up as a technology company, Empire’s software for distribution, analytics, recoupment, and royalties, has offered a level of transparency unprecedented in the music … END_OF_DOCUMENT_TOKEN_TO_BE_REPLACED