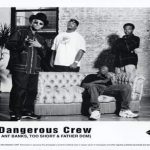 The Dangerous Crew, both as a production crew and rap group, were introduced to the world in 1992 on the Shorty the Pimp album by Too Short. The production squad included Shorty B (bass, guitar, drums), Pee-Wee (keyboards, drums, guitar), Ant Banks (keyboards, drum programming, mixing), Sean G (live drums). Rappers in the outfit consisted of Too Short, Ant … END_OF_DOCUMENT_TOKEN_TO_BE_REPLACED