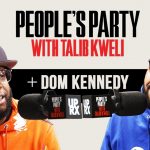 California rap veteran Dom Kennedy is the latest guest to join Talib Kweli and Jasmin Leigh on the People's Party With Talib Kweli podcast. During the conversation, the two discuss Kennedy's illustrious music career, his take on the current culture in L.A., and also opens up about his relationship with the late Nipsey Hussle.  Throughout the episode, the rapper and … END_OF_DOCUMENT_TOKEN_TO_BE_REPLACED