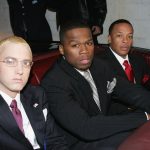 “Crack a Bottle”, a song by Eminem featuring Dr. Dre and 50 Cent was originally released as the lead single off Eminem’s Relapse album in 2009. At the time, the song broke the first-week digital sales record with 418,000 downloads, and went on to win a Grammy Award for Best Rap Performance by a Duo or Group in 2010. Now, “Crack a Bottle” will be included in the second … END_OF_DOCUMENT_TOKEN_TO_BE_REPLACED