While visiting his old neighborhood in Compton, California, N.W.A frontman MC Ren discovered something unexpected, something “BIG”. A rogue, 6ft, 300lb menace named Vince Edwards, aka Lil Nation. MC Ren had known Lil Nation for years but had only been recently made aware that his neighborhood homeboy was into hip-hop. Lil Nation’s younger brother, Andre “Bokie” Edwards, and … END_OF_DOCUMENT_TOKEN_TO_BE_REPLACED 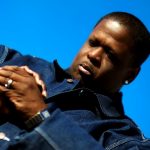 Compton, California's own Vince Edwards, aka CPO Boss Hogg, passed away yesterday (January 12). The passing was confirmed by his brother Bokie Loc to Chad Kiser earlier today. Details have not been made public. CPO had posted about his ongoing health battles on social media, and in 2010, he survived congestive heart failure. The West Coast legend captivated fans of west … END_OF_DOCUMENT_TOKEN_TO_BE_REPLACED

Since 1990 West Coast legend CPO Boss Hogg has been captivating fans of west coast hip-hop once he stepped on the scene with his crew, the Capital Punishment Organization. Discovered and introduced by MC Ren, CPO Boss Hogg, aka Lil’ Nation, made his extraordinary debut when the video to “Ballad Of A Menace” was released, and featured all the members of N.W.A. — Eazy-E, Dr. … END_OF_DOCUMENT_TOKEN_TO_BE_REPLACED