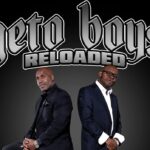 Bushwick Bill, Scarface, and Willie D - known to the world as The Geto Boys - put Houston, TX on the map by pioneering their nightmarish imagery, physical abuse and psychological horror in their songs like their opus "Mind Playing Tricks On Me". Releasing their debut album, 1989’s Grip It! On That Other Level, on Rap-A-lot Records, the trio would go on to become … END_OF_DOCUMENT_TOKEN_TO_BE_REPLACED