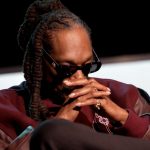 Jane Handcock, who has ghostwritten songs for several of the music industry’s elite including Kelly Rowland of Destiny’s Child, Raphael Saadiq, Rick Ross, Teddy Riley and Tyrese, as well as dropping several incredible songs such as "Like My Weed", “Ion Like Dat” and “Fug It Up”, just released "Til We Meet Again", a new song and video dedicated to Snopp Dogg's Mother, Beverly … END_OF_DOCUMENT_TOKEN_TO_BE_REPLACED