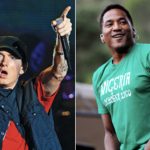 Eminem and A Tribe Called Quest have both been nominated for induction into the Rock & Roll Hall of Fame for 2022, along with Lionel Richie, Carly Simon, Dolly Parton, Beck, and Duran Duran. As one of the highest-selling acts of all time, Eminem's nomination is a no-brainer. The iconic Dr. Dre protégé has been named "Artist Of The Decade" by Billboard, sold over 220 … END_OF_DOCUMENT_TOKEN_TO_BE_REPLACED