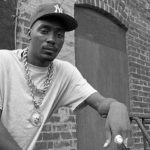 Brooklyn icon Big Daddy Kane was interviewed recently on The Breakfast Club with Charlamagne tha God, Angela Yee, and DJ Envy and discussed his early career battling Biz Markie, working with the late, great Prince on the "Batdance" song for the 1989 Batman movie soundtrack (before Warner Bros. Films had his verse removed), doing his new podcast Did I Ever Tell You The One … END_OF_DOCUMENT_TOKEN_TO_BE_REPLACED