An Evening With Silk Sonic 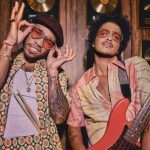 Fans of Silk Sonic, the collaborative album between Bruno Mars and Anderson .Paak, have been waiting for the full-length album from the pair since they dropped “Leave The Door Open” earlier this year. The follow up single, “Skate”, which was released in July did little to quell the anticipation. Now, Bruno Mars and Anderson .Paak have confirmed the release date for their … END_OF_DOCUMENT_TOKEN_TO_BE_REPLACED