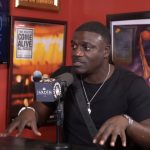 Akon was recently the featured guest on the Bootleg Kev podcast, where he discussed numerous topics including Kanye West’s recent behavior, Lady Gaga, new music and more. During the nearly hour-long interview, Akon revealed that he has four more tracks recorded with Eminem, with whom he collaborated with on “Smack That” which was the first single of Akon’s second studio … END_OF_DOCUMENT_TOKEN_TO_BE_REPLACED