Ain't Nothin But A Word To Me 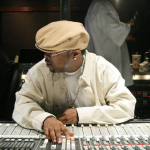 In examining the career of Sir Jinx you’ll notice that he has several key and historical moments, including being one of the first to produce a collaboration record between the California cities of Oakland and Los Angeles with the Too Short and Ice Cube collaboration “Ain’t Nothin’ But A Word To Me”, helping to usher in the first female west coast emcee with Yo-Yo, putting … END_OF_DOCUMENT_TOKEN_TO_BE_REPLACED