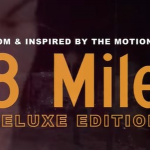 It's been a busy 2022 for Eminem, as the year has seen the Detroit emcee win an Emmy Award for his performance during the Pepsi Halftime Show of Super Bowl LVI alongside Dr. Dre, Snoop Dogg, 50 Cent, Mary J. Blige, and Kendrick Lamar, top the Billboard Hot Gospel chart with the Kanye West “Use This Gospel (Remix),” produced by Dr. Dre and The ICU (Dem Jointz, Fredwreck, Trevor … END_OF_DOCUMENT_TOKEN_TO_BE_REPLACED