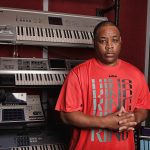 The ground-breaking roots of rapper/producer E-A Ski trace back deep within the concrete history of Bay Area music; you can find the musical fingerprints of E-A Ski with rapper Spice 1 before (and during) his time with Jive Records in the 90s. E-A Ski produced three tracks off of Spice 1’s self-titled debut album while signed to the record label, and contributed another four … END_OF_DOCUMENT_TOKEN_TO_BE_REPLACED