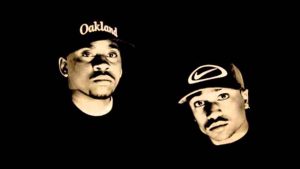 Rappin’ Ron and Ant Diddley Dog were a talented and ferocious Oakland, CA hip-hop duo known as the Bad N–Fluenz click.  The promising West Coast prodigies were an integral part of the mid-to-late 90’s Oakland gangsta rap scene, which at the time was a thriving underground hotbed with the likes of Too Short, Bad–N–Fluenz, the Luniz, and 3xKrazy highlighting Oakland’s hardcore rap landscape. Rappin’ Ron & Ant Diddley Dog were at the heart of this pioneering era which put the Bay Area on the map long before the Hyphy Movement.

Inspired by Run-DMC, Gand Daddy I.U., LL Cool J, MC Ant, Dangerous Dame and others, the two emcees began recording together in the early nineties after meeting each other through mutual friends.  This early, rare demo included songs like “Somethin’ About Oakland”, Lyrical Catastrophe”, and “The Turfs”, where Ron freestyled a rap about all the hoods in the town, enunciating and articulating all of the flatlands in Oakland succinctly and in depth. All put on tape the demo began circulating, and eventually found it’s way to 16th & Myrtle Street, Dangerous Music Studios, where Too Short, Ant Banks and the Dangerous Crew were recording.

The duo were brought in to the studio one night, and while Goldy, Pee-Wee, Ant Banks, and Too Short were there when the two youngsters began putting on a rapping display that dumbfounded everyone in the room.  Ron and Ant were so impressive that Too Short immediately had them record a song for his latest project at the time, Get In Where You Fit In.  The title track featured an intro verse from Too Short, before the Bad N–Fluenz click took over and ripped it to shreds, marking the first appearance for the group on a major record.

During this time period, everyone and anyone who was in the music scene in Oakland, CA came through the Dangerous Music studio at one time or another.  One evening, the Luniz were in the studio with their manager Chris Hicks, as were Ron and Ant Diddley.  Both groups were wanting to sign with Dangerous Music, so in order to decide who would get signed, there was a wager placed on a freestyle battle between the two groups, and whoever won would get signed to the label.  As the story goes, after Yukmouth went first, Ron followed up with an impressive freestyle that ended with Ron rapping, “I’m a hit you wit a head shot/ leave you in a dead spot/ and when yo’ head drop/ I’m a snatch out every dreadlock”.  And no sooner than the battle got started, did it end with Bad N–Fluenz getting the win.

In 1994 and fresh on the heels of their outstanding feature on “Get In Where You Fit In”, and their impressive freestyle victory over the Luniz, Bad N–Fluenz were a part of Too $hort’s Dangerous Crew and the sky was the limit.  The pair next appeared on Ant Banks second solo album, The Big Badass, on the songs “Clownin’ With The Crew” and “Pimp Style Gangstas” (ft. Stacy Hogg), as well as on Goldy’s “Never That” record from his debut album In The Land of Funk.

In preparation for their impending full-length release, Rappin’ Ron and Ant Diddley Dog released their debut single “All Rapped Up/Smoke Season” in late 1994.  Produced by Ant Banks, “All Rapped Up” shows Ant Diddley Dog’s ability to be creative in making a whole song utilizing other rapper’s names in story form to make one of the dopest and most clever songs ever recorded. When you can break a rap down with a story in bars and make it sound smooth, it means you’ve got skills. Ant Diddley did it on this one, and not too many rappers today can drop flows like this.

Due to Ron and Diddley’s constant running in the streets it became hard for Too Short to lock the duo down to record their debut on Dangerous Music.  Instead, Too Short put Rappin’ Ron and Ant Diddley together with Davey D of Cell Block Records.  In May of 1995, Rappin’ Ron & Ant Diddley Dog relesed the Bad N–Fluenz album on Cell Block Records.  The album featured the now iconic bay Area producer Ant Banks, along with production from Pee-Wee and other notable bay producers at the time like G.O. Twice. The project saw Ron and Didldey appear on tracks with Too $hort, Mr. ILL, Seagram, The Governor, Stacy Hogg, Street Thugs and others.

As far as west coast albums, Bad N–Fluenz is generally considered an untouchable classic from the golden age of Oakland hip-hop. Ron and Diddley compliment each other perfectly, and it’s obvious they really were rapping together all the time, which comes through in their tracks.  The production on the album is tight throughout, especially beats like the one for “The Bomb” which is flawless Ant Banks production.

Ant Banks released his Do or Die album in October 1995, complete with songs featuring and written by his frequent Bad N–Fluenz collaborators like “Keep’em Guessin'” and “Bay Area Massacre”.  The following year, Bad N–Fluenz would also appear on fellow Cell Block Records artist Mr. Ill’s The Rebirth album.  Rappin’ Ron and Ant Diddle Dog featured on several stand-out tracks with ILL including “Vicious”, “They Claim The Got Gats”, “They Ain’t Won Yet”, and “Rhyme or Crime”.

Unfortunately, 1996 would also be the last time we would hear from Rappin’ Ron as he would be tragically killed in a car accident in December on his way home from the studio.  The passing of such a talented and vibrant person rocked the Oakland community to its core, devestating friends, family and his many collaborators, especially his partner in rhyme Ant Diddley Dog.  Ant Diddley Dog, Mr. ILL and Ant Banks would dedicate the “Time Is Tickin'” song from Ant Banks Big Thangs album to their fallen comrade, and that would be the final time we would hear from any Bad N–Fluenz members.

The tragic passing of Rappin’ Ron had a profound affect on Ant Diddley Dog which would lead him to reconsider his lifestyle and direction. The death of his friend and collaborator initiated a journey, leading him in search of a higher purpose for his life, and ultimately steered him to use his incredible talent as a rapper for the cause of Jesus Christ. Now known as A. Doulos, which means “a servant”, this former Too Short protégé and Cell Block Records artist is now an artist with Kerusso Music.

For fans of Ant Diddley Dog, the same lyrical dexterity that set him apart from his contemporaries with Bad N–Fluenz is still fully intact and on display.  You can hear A. Doulos on his 2016 release The Proclamation still spitting cleverly on tracks like “Send Me” ft. Latoya London, “Legacy”, “Masterpiece” and others.