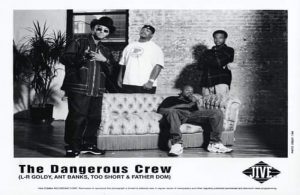 The Dangerous Crew, both as a production crew and rap group, were introduced to the world in 1992 on the Shorty the Pimp album by Too Short. The production squad included Shorty B (bass, guitar, drums), Pee-Wee (keyboards, drums, guitar), Ant Banks (keyboards, drum programming, mixing), Sean G (live drums). Rappers in the outfit consisted of Too Short, Ant Banks, Pooh-Man, Goldy, FM Blue, Rappin’ Ron, Ant Diddley Dog, Spice 1, and Father Dom; as well as female R&B group About Face, who appeared on a few of the later releases by Too Short.

During the 90’s era of west coast hip-hop, Too Short and the Dangerous Crew were lauded for their R-rated rhymes over distinctive live funk sounds. Inspired by George Clinton and his Parliament Funkadelic, Bootsy Collins, The Bar-Kaysand others, producers Ant Banks, Pee-Wee, and Shorty B all contributed to the soundscape that would come to define Too Short’s sustained multi-platinum success in the coming decade spread across 4 solo albums, 4 soundtracks, and numerous guest appearances and compilations.

“Why is my shit so funky it stanks? / Pee-Wee, Shorty B, and Ant Banks” — Too Short from “Get In Where You Fit In”

By 1991, and already 6 albums deep into his career, Too Short began to re-invent himself by putting together a collection of talent that would end up rivaling the most successful of crews in hip-hop, and on December 31, 1991 he gave us our first peek at what he was compiling with the release of the Juice soundtrack.  With Pooh-Man’s “Sex, Money, & Murder” and Too Short’s “So You Want To Be A Gangster”, both produced by  Ant Banks, appearing on the soundtrack to the movie Juice, Too Short had began laying the foundation for his new crew.  Following up 3 months later was Pooh-Man’s Funky As I Wanna Be, which was produced by Ant Banks and Shorty B, and featured Too Short and the late MC Breed.

The Shorty The Pimp release in 1992 ushered in a blend of funk samples augmented by live drums and deftly played bass lines with songs like “I Want To Be Free”, “No Love From Oakland”, and the aforementioned “So You Want To Be A Gangster”. On the posse cut “Something To Ride To”, fellow Dangerous Crew rappers Pooh-Man and Goldy joined Too Short and Ant Banks to introduce us to the newly-formed Oakland, CA crew.  Shorty The Pimp didn’t set the world on fire upon it’s release, but laid the foundation for what was to come from Too Short and his soon-to-be legendary crew.

“I can hear in the album how Shorty B, Pee-Wee, Ant Banks and myself were just about to learn how to work together. We hadn’t perfected it on that album, but we still pulled it off, it still sold well. I still listen back to it, I hear it, I get it, but it’s not that it wasn’t as clean as the next few albums…but you can listen to the music with Banks, Shorty B, Pee-Wee and just the process that we used to do to make beats and songs, and that was just a flawless crew we had.” — Too Short

In May of 1993 The Dangerous crew would show up on the soundtrack to the Menace II Society film with not just “Only The Strong Survive”, but group also with group members Ant Banks (“Packin’ A Gun”) and Spice 1 (“Nigga Gots No Heart”) appeared on the project as well.  Spice-1’s record was the lead-single for the multi-platinum soundtrack and gave even more credence to the burgeoning talent coming out of Oakland, CA.

Coming off of the Dangerous Crew‘s appearance on the Menace II Society soundtrack, Too Short released his 8th album on December 14, 1993 entitled Get In Where You Fit In.  This album became one of the best rap/hip-hop albums of the 90’s, and is considered by most to be a classic.  The Dangerous Crew teamed up with Short to produce the album, and the legendary team made the “Oakland Funk” style a bona-fide sound.  Songs like “Money In The Ghetto”, “I’m A Player”, “Oakland Style”, and “Way Too Real” focus mainly on live instrumentation resulting in a sound that is clear and original, while being backed up by a supporting, unsung cast of characters including Spice 1, Goldy, Father Dom, Rappin’ Ron, Ant Diddly Dog, FM Blue and others. The distinctive styles the rappers when paired with the style-defining beats combine to make Get In Where You Fit In not only Too Short’s best album, but the epitome of the Northern California rap sound during this era.

Hitting their stride, 1995 saw the release of Cocktails, complete with guest appearances by 2Pac, MC Breed, Freddy B, and Malik & Jamal of Illegal.  The Dangerous Crew made this one look easy on songs like, “Ain’t Nothing Like Pimpin'”, “Paystyle”, “Giving Up The Funk,”, “We Do This”, and “Sample The Funk”.  Continuing the tradition of laying down heavy doses of funk, Shorty B, Ant Banks, and Pee-Wee flipped this project into what is quite possibly the best production ever heard on an album.  Mixed by Ant Banks with a surgical precision, the sonic clarity of this project rivals that of any of Dr. Dre‘s efforts.

In late ’95, after producing on numerous albums like Shorty The Pimp, Get In Where You Fit In, Ant Banks’ The Big Badass, the Menace II Society soundtrack, Goldy’s In The Land of Funk, and Cocktails, The Dangerous Crew  released their only collective project, the heavily-slept on compilation entitled, “Don’t Try This At Home”.  The star-studded project featured several members of the crew including Goldy and Father Dom, but Shock G of Digital Underground, MC Breed, Spice-1, and Erick Sermon of EPMD all made unforgettable appearances on the compilation.  Songs like “Leave It Alone”, “Buy You Some”, “Funk Session”, and “Welcome To The Bay” showcase the genius lurking within this iconic crew.

Unfortunately, the last time we would hear from this pioneering crew in full would be on Too Short’s “retirement” album, Gettin’ It (Album Number Ten), released in 1996.  With Ant Banks and Shorty B handling the bulk of production, and with scene-stealing features from MC Breed, Goldy, Erick Sermon and others, Too Short’s final album featuring The Dangerous Crew would be the last and final (4th) album to go Platinum with the crew.

Although the Dangerous Crew had disbanded by 1996, many members went on to have successful solo careers. Rappin’ Ron died in a car accident in 1996. Too Short continues to release music, Ant Banks has gone on to produce Gold and Platinum albums for many successful artists such as E-40, Snoop Dogg, Ice Cube and with Too Short as of 2006, while also producing two incredibly dope T.W.D.Y. albums (Derty Werk and Lead the Way). Shorty B has produced on many Gold and Platinum albums by artists such as 2Pac, TLC, Brandy, T.I. and others.