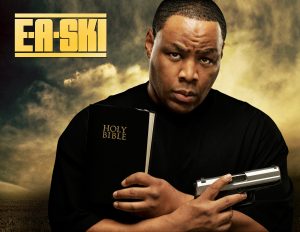 Veteran Bay Area producer E-A-Ski is gearing up for the release of a new album, and just release the debut single, “Please” alongside the legendary Ice Cube.

In the clip, which debuted on MTV over the weekend, both rappers beg God to give them the strength to not revert back to their hood mentalities and commit felonies, via the chorus.

The track is the debut single off E-A Ski’s upcoming album, 5th of Skithoven.