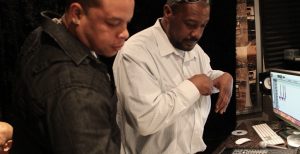 California producer Laylaw was one of the architects of the G-Funk sound. His work with Dr. Dre has appeared on releases for Ruthless Records, Death Row Records, and Aftermath Entertainment. Laylaw also served as advisor to Eazy-E during his days with groundbreaking gangsta- rap group N.W.A. The producer also created music with the late 2Pac, their association starting with the rapper’s sophomore album Strictly 4 My N.I.G.G.A.Z.

Knowing all the connections Laylaw has made with historic members of the Hip Hop community it is unsurprising but, exciting nonetheless, that his vaults would be crammed with unreleased gems. Now, with his Lawhouse Records imprint, the producer plans to release some of those lost gems. First up is the triple disc, box-set “Lawhouse Greatest Hitz.” That album will feature both released and unreleased music from Ice Cube, 2Pac, DJ Quik, E-40, Above The Law, Eazy-E, MC Ren, Nas, Flo-Rida, Pharcyde, Luniz, Michel’le, Stanley Clarke, and George Duke among others.

Laylaw is also planning on exposing some new talent to the world with Lawhouse Records. His most prominent signing is South Central, Los Angeles rapper Chuck Crazy, who recently released his first single, “L.A. Waves.”