American Journalist Chad Kiser speaks to E-A Ski, a successful music producer who has made a career out of making a career for others. Instrumental in the early success for Spice-1 and Master P, E-A Ski helped to provide the sonic back drop to which the East Bay Gangster rode through the 1990’s chart dominance, as well as being highly influential and active to the beginnings of Master P’s No Limit Records. Whether it was producing classic hits like “East Bay Gangster”, “Dumpin’Em In Ditches”, and “Runnin’ Out Da Crackhouse” for Spice-1, or producing the classic single, “Trigga Gots No Heart”, on the Menace II Society Soundtrack, E-A Ski helped pave the way for several artists coming out of northern California.

In addition to his early work with Spice-1 and Master P, The Oakland, CA producer has also provided several noteworthy productions for artists ranging from the Luniz (“Playa Hater”), Kam (“Pull Ya Hoe Card”), and Ice Cube (“Penitentiary”, “Pros Vs. Joes”) to Jayo Felony (“Finna Shit On Em”), Ice-T (“Where The Shit Goes Down”), and E-40 (“Quarterbackin’”). Solidifying his post as a go-to hit-making producer, E-A Ski has also been showcased on several chart-topping soundtracks like the aforementioned Menace II Society and Ice Cube’s Friday (“Blast If I have To”). Currently, E-A-Ski is prepping the solo debut of MTV and Grind Time battle rap champ Locksmith, championing his new film “No Problems”with Danny Glover (which also won the 2010 Okanagan International Film Festival Award), endorsing the new “Maschine” from Native Instruments, and preparing to release his new solo project titled 5th of Skithoven.
In this My Daily Joe exclusive sit-down with the west coast O.G., Mr. Ski shares his thoughts with Chad Kiser on the current state of music, working with the new Native Instruments groove production studio known as the “Maschine”, prepping his industry takeover with Locksmith and Frank Niddie, among other interesting topics.
MyDJ: I want to open this up with how you got started doing music. Who were your inspirations and influences coming up?
E-A Ski: My inspirations were really Run-DMC. That’s who really sparked me because what they were doing was so creative and it moved me to take music seriously. Their stage show, their music, and speaking real stuff and being able to tell my story from my point of view is what really got me into it. I have other influences but that’s who motivated me to do what I really wanted to do.
MyDJ: When did you realize that music [producing] was what you wanted to do?
E-A Ski: I didn’t really realize it in the beginning until I was rapping over records and couldn’t get what I was looking for and when I finally got my own equipment and started to perfect what I wanted to hear is when I knew what I wanted to do. When I was coming up people were rapping over samples and just making records and I wanted to create my own music and my own sound. Labels eventually started hearing my music and was asking me to do production for some of their artists that were signed to their labels and that’s when my production became valuable.
MyDJ: You were recently named a spokesperson & have become an endorser for the new Native Instruments product called the “Maschine”. What’s different about this piece as compared to the other studio equipment you’ve used?
E-A Ski: Number one, it’s a hardware and it’s a software and it allows you to work within DAW and its USB, meaning that you can plug it right into your laptop and take it on the road and allows you to work faster and it’s portable.
MyDJ: Switching gears, talk to me a little bit about your new project “The 5th of Skithoven”. What can fans of E-A Ski expect with this new material? 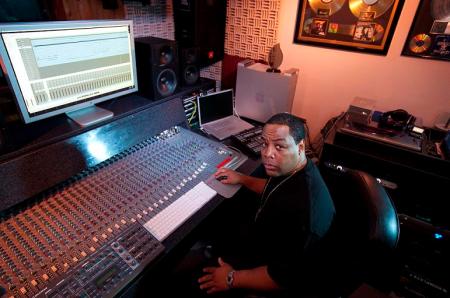