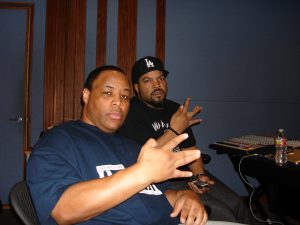 With plans setting into motion, Oakland producer E-A-Ski and veteran emcee Ice Cube will be shooting the music video for Ski’s first single “Please” off his new album 5th of Skithoven this weekend. The long-awaited compilation album features guest spots from Tech N9ne, Freeway and B-Real, however the Cube-assisted record is one West Coast fans have been waiting for since their 1998 collaboration “Penitentiary.”

“We’re in trying times, and that’s where I’m going with this record,” said E-A-Ski, who’s distinguished musical catalog also includes work with Dr. Dre, Spice 1 and Too Short. “I’m noticing that people that I’m close with are losing a lot of integrity, so I’m just saying, ‘please, man, don’t put me in a situation where I have to deal with you on whatever level it is; whether it’s checking you verbally, or checking you physically, or checking you on some street shit.”

Ice Cube rightfully joins E-A-Ski on “Please,” which features a cut-throat attitude that the two West Coast artists established in the early 90’s. “We’ve built a great friendship over the last 17 years, since 1994 when we were both on Priority Records. With him being the homie and respecting what I do, just like I respect what he does, it was just the perfect match-up to do a record for my solo album, to show people how we get down.”